Yesterday, the DMO held a retreat for the review of the Debt Management Office (Establishment, Etc.)...

on Thursday, July 28, 2022. As part of the celebrations, the DMO officially rang the closing bell t...

To maximize market liquidity for investors in the Sovereign Sukuk, the Debt Management Office (DMO) ...

Official Retreat on the Review of the DMO (Establishment, Etc.)...

The DMO celebrated the listing of the USD1.25 Billion FGN...

Press Release: Listing of USD 1.25 Billion Eurobond on the...

Press Release: Listing of N250 Billion Sovereign SUKUK on the...

How Much Loan has Nigeria Taken from China?

These data, show that China is not a major source of funding for the Nigerian Government.

What are the Terms of the Loans from China?

The Total Borrowing from China of USD3.121 billion as at March 31, 2020, are concessional Loans with Interest Rates of 2.50% p.a., Tenor of Twenty (20) years and Grace Period (Moratorium) of Seven (7) years. The Terms and other details of the Loan are available at www.dmo.gov.ng.

These Terms are compliant with the provisions of Section 41 (1a) of the Fiscal Responsibility Act, 2007. In addition, the low interest rate reduces the Interest Cost to Government while the long tenor enables the repayment of the principal sum of the Loans over many years. These two benefits, make the provisions for Debt Service in the Annual Budget lower than they would otherwise have been if the Loans were on commercial terms.

What Were the Loans Used For?

The impact of these Loans is not only evident but visible. For instance, the Idu – Kaduna Rail Line has become a major source of transportation between Abuja and Kaduna. Also, the new International Airport in Abuja, has improved air transportation for the populace, while the Lagos – Ibadan rail line when completed, will ease traffic on the busy Lagos -Ibadan Expressway.

The projects also have the added benefits of job creation, not only by themselves but through direct and indirect service providers, a number of which are Small and Medium Enterprises.

It is widely accepted that investment in infrastructure is one of the most effective tools for countries to achieve economic growth and development. Using Loans from China to finance infrastructure is thus in alignment with this position.

What Is the Process by which the Loans were Obtained?

The principal process and requirements for borrowing by the Government are expressly stated in the Debt Management Office Establishment (ETC) Act, 2003 (DMO Act) and the Fiscal Responsibility Act, 2007. Section 21 (1) of the DMO Act, “No External loan shall be approved or obtained by the Minister unless its terms and conditions shall have been laid before the National Assembly and approved by its resolution” and Section 41 (1a) of the FRA, “Government at all tiers shall only borrow for capital expenditure and human development, provided that, such borrowing shall be on concessional terms with low interest rate and with a reasonable long amortization period subject to the approval of the appropriate legislative body where necessary”, are instructive in this regard.

For detailed information on the borrowing process and required approvals please go to “External and Domestic Borrowing Guidelines for Federal Government, State Government and the Federal Capital Territory and their Agencies” at www.dmo.gov.ng/publications/other-publications/borrowing-guidelines

In summary, Borrowing is a joint activity between the Executive (FEC) and the Legislative (NASS) Arms of Government.

How Rigorous is the Loan Documentation?

Can China Take Possession of the Projects Financed by them if Nigeria Defaults in the Servicing of the Loan?

Firstly, Nigeria explicitly provides for Debt Service on its External and Domestic Debt in its Annual Budgets. In effect, this means that Debt Service is recognised and payment is planned for. In addition, a number of the projects being (and to be) financed by the Loans are either revenue generating or have the potential to generate revenue. 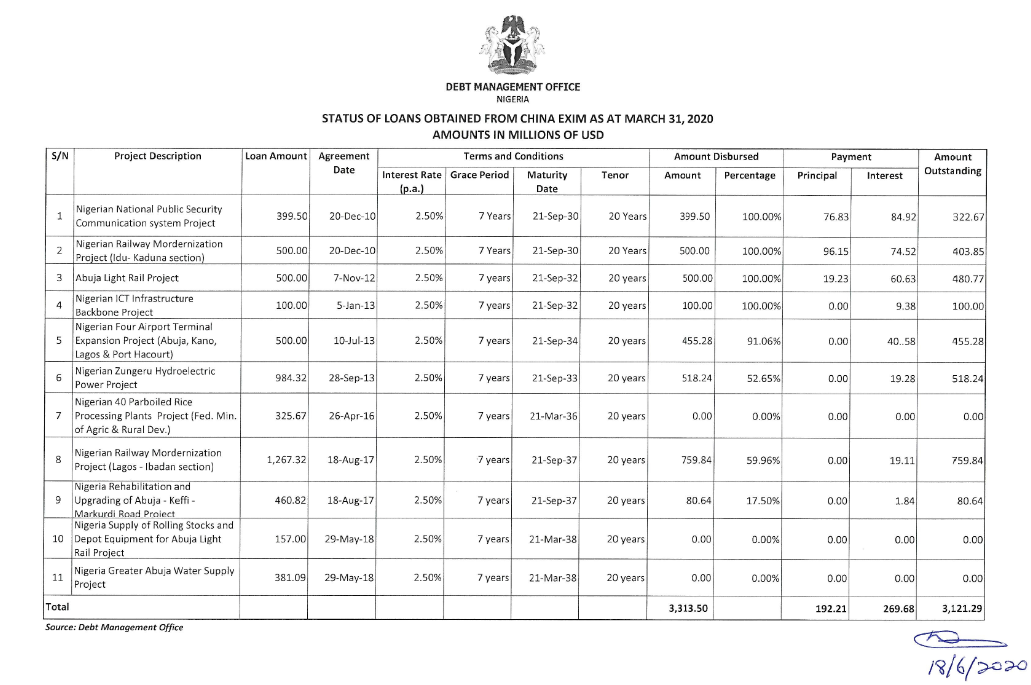 FACTS ABOUT CHINESE LOANS TO NIGERIA

The attention of the Debt Management Office (DMO), has been drawn to statements and reports credited to several persons on the subject of Loans obtained from China and has considered it necessary to provide a sequel to its Press Release on the same subject dated September 11, 2018.

The general public is encouraged to be guided by the facts in this Press Release.

Our vision is to be a Public Debt Management Institution of global reference.

Our Mission is to meet the Government’s financing needs in a prudent manner that supports economic development, while proactively managing the risks associated with the public debt.

R -  Respect: To hold staff and stakeholders in high esteem.

E –  Excellence: To be outstanding in service delivery.

C –  Commitment: To be totally devoted to delivering on the DMO’s Mandate.

I –  Integrity: To be transparent in our operations.

T – Teamwork: To ensure that all members of staff have collective responsibility for the DMO’s mandate and work together towards its achievement.

E – Efficiency: To optimize our resources in the execution of our Mandate.